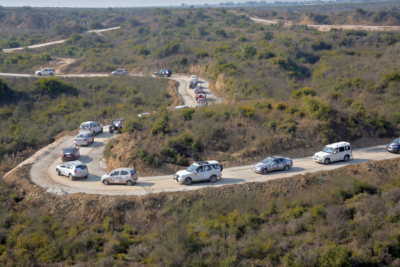 Top biker CS Santosh, who became the First Indian to finish the Dakar Rally recently, and Gaurav Gill, a two-time Asia Pacific champion, were the chief guests during the rally which concluded at the ‘City of Taj – Agra’.
The rally was part of the forward-looking initiatives that UP tourism had announced to develop ‘Agra beyond Taj’ and the ‘Heritage Arc of Uttar Pradesh’.

Shashank Vikram (IFS), Managing Director and Special Secretary, UP Tourism said: “In an effort to promote the Heritage Arc of Uttar Pradesh, we are organising the Rally. It is a Time, Speed and Distance (TSD) competition conducted through the various locales of Uttar Pradesh that seeks to create greater awareness on the unexplored terrains of ‘The Land of Taj i.E. AGRA-UP.”
The two-day rally explored the Sangam of Yamuna and Chambal rivers on the first day. Moving onto the second day, the rally enabled the participants to unravel the charms of Uttar Pradesh’s hinterlands around the famed Chambal Valley, Jarar, Brara amongst others.